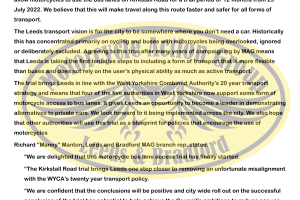 The Leeds and Bradford Motorcycle Action Group welcomes the decision by Leeds City Council to allow motorcycles to use the bus lanes on Kirkstall Road for a trial period of 12 months from 29 July 2022. We believe that this will make travel along this route faster and safer for all forms of transport.

The Leeds transport vision is for the city to be somewhere where you don’t need a car. Historically this has concentrated primarily on cycling and buses with motorcycles being overlooked, ignored or deliberately excluded. Agreeing to this trial after many years of campaigning by MAG means that Leeds is taking the first tentative steps to including a form of transport that is more flexible than buses and does not rely on the user’s physical ability as much as active transport.

The trial brings Leeds in line with the West Yorkshire Combined Authority’s 20 year transport strategy and means that four of the five authorities in West Yorkshire now support some form of motorcycle access to bus lanes. It gives Leeds an opportunity to become a leader in demonstrating alternatives to private cars. We look forward to it being implemented across the city. We also hope that other authorities will use this trial as a blueprint for policies that encourage the use of motorcycles

“We are delighted that this motorcycle bus lane access trial has finally started.

“We are looking forward to a roll out across the whole of Leeds which will make motorcycling safer and an even more convenient alternative to the car.”