Happy new year and welcome to the latest Leeds MAG newsletter
Below is the political write up for this month from the Yorkshire Political Rep, Steve Bolton –
On the Political front, as ever the West Yorkshire Bus Lane debate rumbles on.
Things are nearing a critical stage and I hope to have some positive news for you in the next Newsletter.
However on the Parking front we have made considerable progress.
I’ve written an article for the next edition of The Road which outlines very positive parking  progress in Calderdale.
There are other positive parking improvements underway both in Kirklees and Wakefield and these too will form write ups in upcoming editions of The Road.
Meetings wise, Ian Whittaker and myself are out and about meeting various committees in West Yorkshire, networking for MAG and increasingly getting us recognised as the go-to people for Motorcycling input, opinions and advice.
There are lots of things going on behind the scenes as some of the councillors and officers locally, aren’t doing what they should be so we’re looking to bring them to account. There’ll be more details when we have them
Here is the link to the current “Network” which will keep you informed with MAG happenings around the country. https://wiki.mag-uk.org/images/f/f5/Network_2019-01.pdf
Membership continues to rise steadily. NEC was a great success and they want to use more grass roots members to man the stand in the future. If you fancy helping out at next year’s show get in touch.
There were lots of group parties over Christmas and new year and it looks as though everyone had a great time according to Facebook. If you’re not already a member of the various Yorkshire Facebook groups, you really should join your local one (or all of them) as it’s a great way to keep in touch with what’s happening throughout the region.
I’ve been asked to shout out for Marshals for the Fat Skeleton Blues ‘n’ Bikes Rally.  This is over the Easter weekend (19th to 22nd April) at Carbourne Parva, Near Caistor, Lincolnshire, LN7 6DR.  Anyone who would like to volunteer, please contact Ron Smith 07737613786.
Tickets are now on sale for the three Yorkshire MAG rallies and can be bought at your local meetings, certain select retailers or online at https://mapevents.co.uk
We’re always on the look out for new marshals, because without our marshals we can’t put the rallies on. We’re almost like a family within a family and I can say from personal experience that marshalling at our rallies gives a whole new appreciation of them and is fantastic fun. Email mag.marshals@live.com for more details.
We’ve got a few events coming up in the next few months that you may want to add to your diaries.

Tuesday 22nd January – Leeds MAG Comedy night at The Royal Hotel, LS28 8PR. We have a few tickets left so if you want to come get your tickets here http://leeds.mag-uk.org/shop/ it’s always a brilliant night and the ticket price includes a curry supper.
Tuesday 29th January – Leeds MAG AGM at The Royal Hotel LS28 8PR from 8pm. All MAG members welcome and bring your card if you want to vote.
We’ve got two Fred Hill rides in the region. Both appreciate your support and the sacrifice Fred made should never be forgotten as it underpins the MAG ethos to the day – Freedom of choice rather than compulsion.
Sunday 10th February – Leeds MAG Fred Hill Run. Meeting at Squires from 10 to leave at 11 prompt to ride to The Sun Inn at Norwood
Sunday 17th March – Yorkshire MAG and MAP meetings at The Royal Hotel LS28 8PR from 10am. All MAG members welcome.
Saturday 23rd March – Leeds MAG presents An Evening With Ed March! Following the success of our previous motorcycle travel talks, we’ve managed to secure madcap C90 adventurer Ed March to come and talk to us. Check out his exploits on YouTube then come and meet the man himself

Finally if you want to get more involved at a local level (and to really get the most out of your MAG membership, I strongly recommend that you do) here are the meeting details of the five Yorkshire MAG groups – though we are looking to expand with more groups so if you haven’t got one close by and fancy getting together with like minded bikers, get in touch with me at manny@mag-uk.org
We’re very lucky in having some very strong groups in Yorkshire, but we need the members to join in, so pop along to your local meeting and help to make a difference

MAG is offering up to £1,000 to catch a potential road killer.

MAG has announced a £1,000 reward for information leading to the successful prosecution of the individual responsible for a ‘hit & run’ incident near the Squires Café Bar in North Yorkshire, where a car driver left a seriously injured motorcyclist, Matthew Ramsden, lying on the road with his damaged motorcycle.

The incident occurred in Sherburn-in-Elmet. Police say that Matthew was travelling along the B1222, near Peckfield, on Sunday 6 January at around 4.40pm, when he collided with a car at the junction with the A63. The driver did not stop at the scene.

Castleford-based firm, West Riding Personal Financial Solutions, has also put up £1,000 for information leading to a prosecution. Police believe the car to be a silver saloon – possibly a VW or a Skoda – and it suffered severe rear bumper damage as a result of the collision.

Yorkshire MAG Representative Richard ‘Manny’ Manton describes this latest incident as a ‘line in the sand.’ He says: ‘the guilty driver showed no respect for the biker’s life or property – and also decided to evade the law instead of fulfilling a basic moral and legal responsibility as a road user.’

Manny continues: ‘we’re offering up to one thousand pounds for information leading to a successful prosecution because MAG isn’t going to stand by and tolerate blatant criminality on the highways of Yorkshire – or any other part of Britain. If you know who did this, and you don’t speak up, you’re protecting someone who can’t be trusted by you or anyone else. Help us get justice – and potentially pick up a thousand pounds for yourself. This offender isn’t fit to be on the roads. If they are not found, they can do it again – to you or someone you love.’

Please contact MAG on 01926 844 064 with any information. You can speak to us in confidence. We won’t reveal your identity – we just want the identity of a law-breaker too cowardly to stay at the scene of a serious accident where someone could have died.

You can visit this site to get further police information about the incident:

Yesterday at the Yorkshire Pudding Rally, NABD Chairman Rick Hulse drew out the winning ticket for the Daft Way Up C90 raffle to win Manny’s bike.

The lucky winner is number 109, Lorna from Brighouse. Thanks to all who supported the Daft Way Up for the past few months. We’ll release the final total raised at the MAG AGC, but suffice to say both MAG and Macmillan cancer care will both be getting sizeable donations. 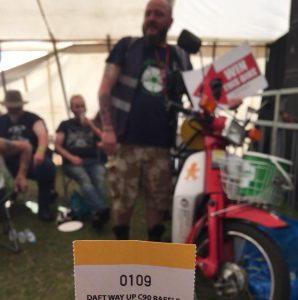 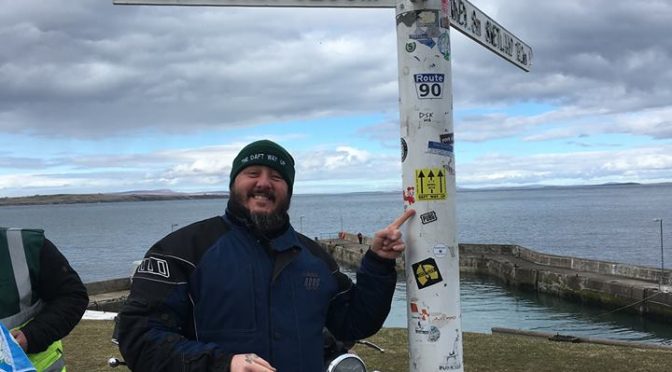 The initial idea for this fundraiser came about after Leeds MAG had hosted a talk by Nathan Millward, who’d ridden a Honda postie bike from Australia to the UK.

“We should do something daft like that!” We said…..and if we do we should raise some funds for MAG. Last year the MAG family lost Ian Williamson to cancer, so Macmillan cancer care was added to the beneficiaries of the ride.

After batting a few ideas around we decided on Lands End to John O Groats and instead of one type of bike, we said inappropriate motorcycles should be ridden. Basically, if the bike you chose to ride was inappropriate for a trip of 1000 miles, that would do!

We decided to self fund the ride so the two causes would benefit from all the money raised, this meant that each rider paid out of their own pocket for an inappropriate motorcycle, all fuel, accommodation, and holiday time to complete the trip.

We were amazed at the response from interested MAG members and finally ended up with 17 riders, 2 support drivers a cameraman and a fixer (to sort out all the odds and ends for everyone)

We set the start date for 1st April (when else?) and planned everything from that.

Due to time restrictions (getting time off work) we planned to get the bikes from home to Lands End and from John O Groats to home at the end in hire vans.

END_OF_DOCUMENT_TOKEN_TO_BE_REPLACED

Congratulations to the Daft Way Up team for successfully completing their journey. It wasn’t easy. Snow in Alston claimed a few casualties and they also had to cope with speed cameras on the A9 to Inverness. However they arrived at John O’Groats yesterday. 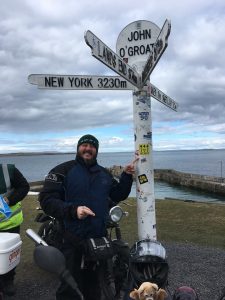 You can still donate via https://www.justgiving.com/crowdfunding/mag-daft-way-up and remember, it’s 50% to MAG and 50% to Macmillan Nurses, both very good causes.

The Motorcycle Action Group (MAG), the UK’s leading voice for riders, will be hoping for good weather over the Easter weekend as riders set off on a lengthy fundraising trip.

Around twenty intrepid MAG members hope to embark on a week-long adventure entitled ‘The Daft Way Up’ to raise funds for MAG and Macmillan Cancer Support.  The trip will be self-funded, ridden on ‘inappropriate’ motorcycles and will take a week to complete.

Richard Manton, Leeds and Yorkshire Regional Rep for MAG said: “We are inviting members to join us along the route on their own motorcycles (inappropriate or not) to support and highlight our efforts.  We will set off each day at 10.00 am from the following venues:

and we hope to arrive at John O’ Groats at approximately 2.00 pm on the final day.

If you can see us off, welcome us in or join in yourself at any point, it will be greatly appreciated.   Anyone who does join in will be able to obtain a pair of ‘Daft Way Up’ stickers for a suggested donation of £5.00.  All support and donations will be very gratefully received.”

One of the bikes on the trip will have a tracker fitted so it will be possible to see exactly where the DWU riders are at any point.  There will be a ‘Daft Way Up Diary’ posted on Facebook with daily updates and donations can be pledged via the donation page on Facebook; just Google ‘daft way up’ and follow the links.

Donations will be split 50/50 between MAG and Macmillan Cancer Support.  Donate en-route to any of “The Dafties” or online at https://www.justgiving.com/crowdfunding/mag-daft-way-up

Unfortunately we’ve now sold all our tickets for An Evening with Elsbeth Beard. Thanks for your support and we hope you enjoy the evening if you managed to get one.

The next event in our regular series of talks will be An Evening With Elsbeth on the 24th of March 2018. Full details including online ticket sales in our shop. 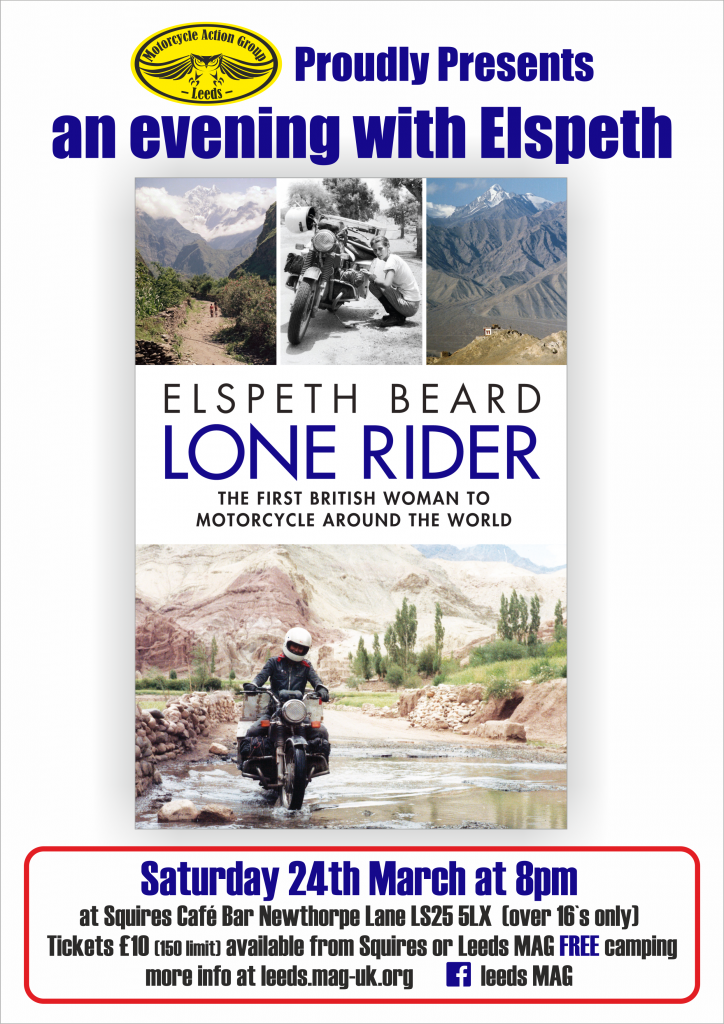 Get your flat caps, Nora Batty tights and whippets out (not a euphemism!). Our next social event will be a celebration of Yorkshire Day on the 29th of July at the Royal Hotel in Pudsey. We’ve got a busy day ahead with lots going on. All proceeds will be split between MAG and the Yorkshire Air Ambulance. 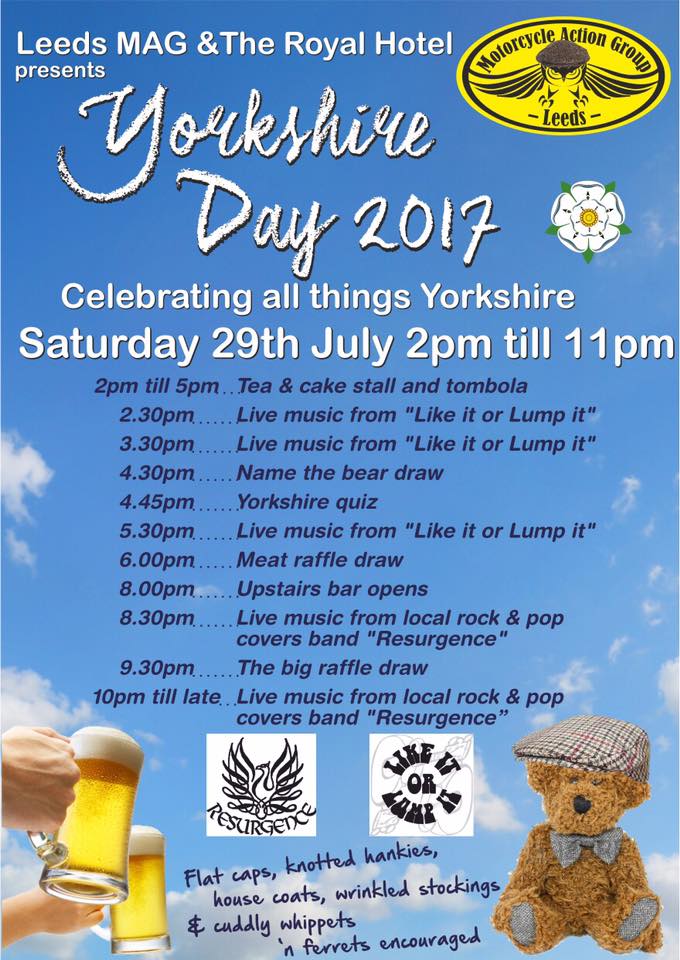 Be there or be Lancastrian!